Rose-breeding: It's All in the Planning

Someone said to me once “You can get two roses, cross them, and something commercial will result”: but as with the breeding of anything, planned breeding practices will give better results and save time. This time is very valuable: for instance, haphazard crossing may look well and good at the time of initiation, but the results down the track may be disappointing, and you have lost a year or two realising it. I said to a rose grower once, people think crossing two nice roses will produce a nice rose, but that is not always the case. 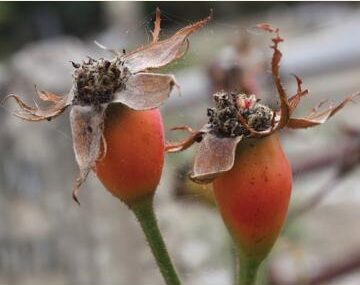 My breeding programme starts one year before I do the final pollination. Research into parents is vital, and if done properly, you have a good idea what you are going to get in the end. The most important thing to look at, if possible, is the first generation offspring of both parents - don’t look at anything else. You must be aware of the major traits each is going to pass on to their offspring. Such traits can be:

In 2009 I did a ‘Charles Austin’ x ‘Vanilla’. What I was looking at here was to change the bloom shape, upwards. The high petal count of ‘Charles Austin’ and ‘Vanilla’ with its high-centred bloom gave me the required result. You can either tighten or loosen a bloom, as with anything you want to change, but knowledge of the major traits is vital.

Pollination, for me, usually starts very early October as summer temperatures here in the Riverina can dry out the stigma ends, inhibiting successful fertilization. Preparation of the bloom for pollination or the collection of pollen all amounts to timing. The bloom stage is just under three quarter open; with your fingers squeeze the bloom gently. If there is a lot of give, I say it’s ready for pollen harvest or pollinating. Leaving it too long can result in contamination by pollinating insects or the pollen shedding into the bloom. If done too early with the bloom being extremely tight, it can result in tearing away stigmas and the seed chamber. With single-flowered cultivars and species singles, timing is even more crucial. An example of this would be Rugosas; petals are stripped very early as they start shedding pollen before being fully open, contaminating themselves, resulting in self-crossing.

Here are a couple of photographs demonstrating the preparation of a bloom for pollination.

The first one shows a bloom stripped of petals, showing abundant anthers with the stigmas deep inside the middle.

The second photograph shows the anthers cut away leaving the stigmas. 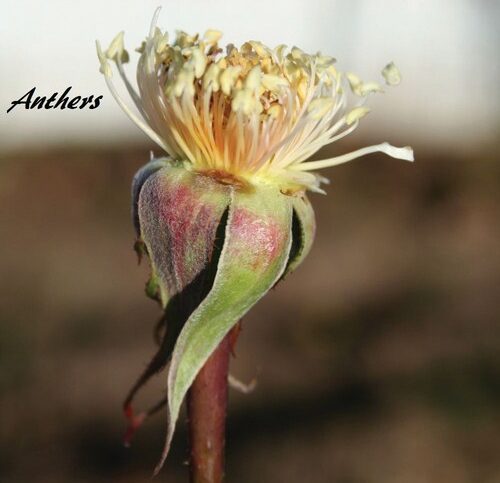 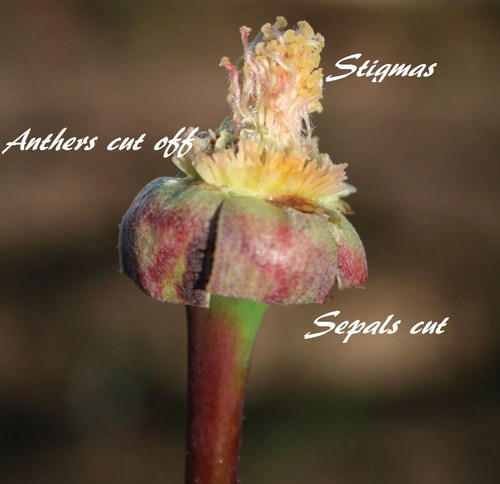 All anthers must be removed as contamination from pollen will result in self- pollinated offspring. I also make it a habit of cutting the sepals in half, even though the bloom will be tagged; sometimes one cuts things off when dead-heading as the tag may be hidden in foliage.* Cutting the sepals makes it very obvious that it is a cross. When collecting pollen, the anthers are cut off and placed in a very clean small container. After 4-6 hours, depending on cultivar type, a sharp tap on the container should help release pollen; if not, leave it a little longer. Some cultivars are reluctant to release pollen, which can be quite frustrating.

Fertilization of a bloom is normally done early morning or late in the afternoon. Pollen is placed on the prepared bloom’s stigmas using a sable paint brush, and then the bloom is covered with a paper envelope to stop contamination. This envelope is to stay on the bloom for a minimum of three days.

The collection of ripe hips usually starts around late February to the end of March, depending on cultivar types. All seed is cleaned free of hip material, placed in individual containers with moist peatmoss and labelled according to its cross. Seeds must be stratified for a minimum period of six weeks, at temperatures between 3-50C, as this aids the seed to break dormancy and germinate. The inside of any domestic refrigerator is effective, but seeds must not be placed inside the freezer.

I sow all my seed into 5cm tubes filled with a seed-raising mix, and all tubes are labelled with the cross identification, using a white-out pen on the side of the black tube. Again depending on cultivar types, germination will occur from around 3 weeks after sowing.

Not all seed will germinate, so after a period of time, seedlings will be pricked out and transplanted into individual 5cm tubes containing normal potting mix, and fertilized weekly with half-strength Aquasol or Thrive. If they are going to be prolific bloomers, you should see flower buds forming 10 weeks after germination. I transplant these seedlings in August, when they have achieved a height of 20cm or more, into prepared beds in an open field situation, where they are not given any protection. I find growing my seedlings through winter gives me better growth and an extended growing season through summer through to autumn; I get phenomenal growth doing it this way.

As you can see, planning and timing the preparation of blooms, the collection and preparation of seed and the planting out of your seedlings are a fundamental process when breeding roses, which can give some tremendous results.

* Beware the compulsive dead-headers among your visitors ...

I asked Warren for this article, as I was intrigued by the differences, mainly in timing, between his technique and George Thomson’s. George pollinates till February / March, at Willunga, SA; but if I leave it that late, in the Adelaide Hills, the hips don’t ripen by winter.

George (who is a retired Professor of Animal Husbandry, but keeps it quiet) considers that pollen becomes less virile as the summer progresses. Pollen is usable for several days after harvesting, or can be stored in the freezer for a long time until a suitable recipient is available.

George doesn’t cover the pollinated blooms - he feels that with the stamens and petals removed (except for a ‘flag’ petal so you can find the bloom again!), there is nothing to attract insects.

Hips can be harvested if any part shows ripe colouring. Some people stratify the seeds between layers of damp kitchen sponge.

Because he’s doing large numbers, George plants into broccoli boxes. He plants the seed in July, and expects the first blooms by Christmas. If the seedlings don’t flower in their first summer, they are not likely to be repeat-flowerers.

Warren and George have these things in common; they research their crosses, they use an innovative range of parents including Teas, health of the offspring is important, they’re mostly not breeding for high-centred HTs, and their results make me very envious.