Modified from a technique developed in the US by Mike Shoup. In theory this works for any plant that doesn’t have furry leaves, but our main success has been with roses.

Used from about mid-November to mid- February (as starting date, in southern Australia). In autumn, in-ground cuttings give better results.

Cut the bottom corners (about 1 - 2cm) from a zip-lock (food storage) bag - 32 x 25cm or thereabouts (a single zip mechanism isn't robust enough for a second use, so I'm trying those with a double zip, hoping to reduce plastic waste).

Put about 10cm depth of commercial seedling & cutting mix into the bag, or use a potting mix with good water-holding capacity. Nu-earth Premium, Bailey's Premium are OK, Brunnings' has not been satisfactory. An aerator, e.g. handful of perlite, is recommended in the US, but is probably not necessary with our potting mixes. Water it until the mixture is wet through, then close the bag and leave it to drain for several hours.

The cuttings should be taken from a stem that has flowered, up to a pencil-size diameter (old-rose rescuers generally have to use much smaller bits). For climbers, the cutting should be from a climbing shoot. (It should be noted that some people get good results by storing cuttings in damp newspaper for a week to encourage callus formation, but don't re-trim the cuttings before putting into the soil. Others like to stand their cuttings in water with dilute Seasol or willow water for a few days).

Cut off the top bud. Take the leaves off the bottom 2 or 3 nodes (which will go into the potting mix), and leave a few leaves on 2 or 3 upper nodes. (Leafless pieces are much slower, and less likely to succeed.) Re-cut the stem obliquely a little below the lowest node, and dip it immediately into a rooting hormone (some people use honey or water that has had willow stems in it). Make a hole in the potting mix almost to the bottom of the bag, and put the cutting into the hole. A bag will take 3-4 cuttings. Close the bag, and write the name and date on the outside of the bag with an Artline garden marker pen, where they are easily seen. It is not a good idea to put cuttings of different roses into the same doggybag; it’s too easy to mix them up. If you don't restrict the bag to only one cultivar, write the name or a recognizable abbreviation on each cutting with the Artline garden marker pen (from a stationery shop).

The bags should be put where they will receive light but not direct sunlight. They can be put in groups standing in a cat-litter tray (from an el cheapo store), so they will support each other and are less likely to be knocked over. ( 3-5 per tray, depending on size.) It’s essential that the drainage holes aren’t blocked. It’s important not to disturb the developing roots, but the bag can be opened from time to time to remove fallen leaves or flower buds or dead cuttings (make sure it is sealed properly again afterwards). (You can blow into the bag to plump it up.)

If you can’t see many droplets of moisture on the inside of the bag after a while, add a teaspoon or two of water (or diluted Seasol), but this is rarely necessary.

When good roots are visible in the bottom of the bag (and not before), leave the bag unsealed for a few days to harden off the plant (it may need some water). Then it can be potted out, a few hours after adding water to the bag; scooping out a handful of soil around the roots. (Loss rate from potting out is about 1 in 12; – higher if you take them out before the roots are fairly well-developed.) Tiny pink new leaves usually wilt straight away, and may be better removed. The plant will be top-heavy, and will need shelter from wind for some weeks. Introduce it gradually to sunlight over a couple of weeks. Feed weekly with dilute Seasol alternating with a dilute fertiliser containing trace elements until it is planted out or potted on. Mulching of pots or in-ground plants is important.

As a rough guide: for rambler roses, you can start looking for roots at 3- 4 weeks; for Tea roses from about 6 weeks. HTs, especially the yellows, are much slower and have a lower success rate. The Old European roses (spring-flowerers) are harder to strike – it’s easier to dig up a sucker if they’re growing on their own roots (but they will sucker if planted on their own roots in the garden, and may become invasive. Rugosas and species roses similarly may become invasive if planted on their own roots. For these roses, it's preferable to get someone to bud them, or you can grow them in large tubs on saucers).

For large numbers of cuttings, carefully labelled, the potting mix +/- aerator can be used in a broccoli box with drainage holes. I have seen impressive results from this technique in autumn, and potting up in early November).

An alternative technique is to use damp potting mix or seedling mix in clear plastic cups with drainage holes made near the bottom. Put the cups into a clear plastic container. Place where they get light, but not direct sunlight, and don't overheat. The cuttings can be potted on when the roots are visible, then the cups can be washed for re-use.

For cuttings taken in May, in-ground cuttings work best, especially in areas which get some winter frosts, although potted cuttings are another option. Longer cuttings than in doggybags are preferable, with at least 2 nodes in the ground, and most of the leaves removed. The larger the piece, the more stored carbohydrate it will have (up to pencil-thickness). They will need mulching, and twice-weekly watering through the summer. It’s best not to dig them up until the winter of the following year. See also the broccoli box technique,above.

Looking after baby roses. We suggest watering weekly through the first summer (preferably not overhead watering), fortnightly the second, monthly thereafter. This may need to be increased in heatwaves. It's better to remove almost all the flower buds in the first year, so the plant will put its energy into making roots and leaves. Stressed plants do better with flower buds or developing fruit (hips) removed.

Spraying. In general, most of us don’t. Milk/powdered milk diluted 1 in 10 can be used for mildew, or to protect soft new growth when a heatwave is predicted. Parasitic wasps can be bought, to deal with aphids, and predator mites to deal with spider mite infestations.

Foundling roses are generally given a study name (within double inverted commas) based on where they come from (e.g. the district or the name on the nearest grave) or someone associated with the rose. If there is more than one unknown at the site, a descriptive term is helpful, e.g. "Mylor mauve rambler", but short enough to fit well onto a label. It’s a good idea to keep a planting plan of your garden in case labels fade or disappear, and a record of where they came from. 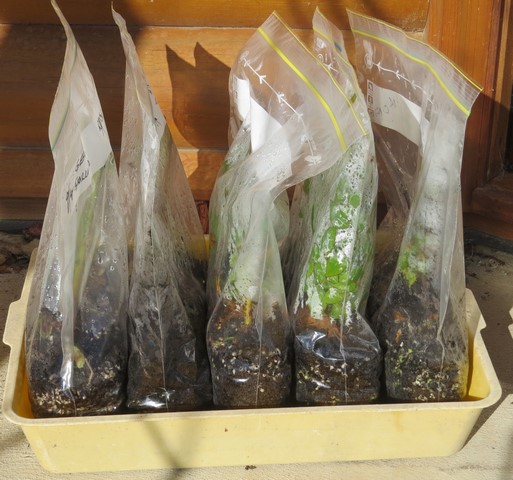 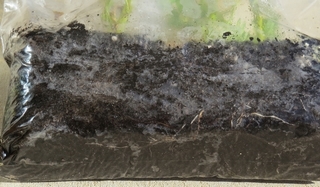 Wait a week before opening the bag.