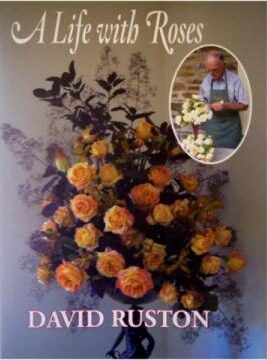 A fascinating insight into the life of Australia's foremost Rosearian, David Ruston of Renmark, S.A. From the flyleaf: "David tells his fascinating tale in a modest and unassuming way. He has coupled this with photographs and descriptions of some of the flamboyant and unusual flower arrangements that he has made in most continents of the world over a period of many years."

Review:
Hardback with dust jacket, 232 pages. $50 from Rosenberg Press, or (signed) from David.

A Life with Roses is a delightful tale, a piece of history and a meandering wander of rose gardens and exquisite floral arrangements.

It seems that David was destined to share his passion for roses. ‘Ruston’ is a derivation of ‘Rosethorn’. He was interested in roses at a very early age. His father grew 300 rose bushes in his garden, where David and his twin brother ate all the rosebuds within reach.
David had his own garden by the time he was eight, and started helping with the rose garden soon after that. After attending High School in Adelaide and an Art Course at University for a year, he came back to Renmark to work on the fruit property and started planting more roses there in 1950. Eventually, the garden was extended to 50,000 rose plantings and eleven hectares, the largest private collection of roses in the southern hemisphere. It is officially recognised as the National Collection of Roses in Australia.

We flow from early years to ‘Flower Arranging Through the Ages’ which takes us on an inspiring floral journey through history - the inspiration for many of David’s floral arrangements, ‘Special Events’ which includes the Queen’s visit to Carrick Hill, and the World of Conferences. I loved reading an account of the Belfast Conference in 1991 where Dr Charles Nelson talked about ‘The History of the Rose in Ireland’, ending with Thomas Moore’s ‘last rose of summer’, which was reputed to be ‘Old Blush’.

On to 1986 and the first Heritage Rose Conference in Australia, which was held in Adelaide. I had very fond memories reading this. My husband and I served on that committee with Trevor Nottle (who founded Heritage Roses in Australia in 1979), David, Deane and Maureen Ross and many others. So many inspiring speakers attended that Conference, including Barbara Cannon, Gwen Fagan, Susan Irvine and Peter Beales. David gives his fond account of Peter Beales’ visit to Renmark later in the book.

Many beautiful gardens and Conference experiences are described - here are a few magical moments - an outstanding talk on Pernetiana roses in Lyon in 1999, with an evening soirée in a floodlit garden on a hilltop, revealing hundreds of old roses and climbers on pergolas; Wichurana ramblers trained up tall larch poles in the Sangerhausen Rosarium; and the roses of ‘Ninfa’ set in the ruins of a 13th Century village near Rome. The contemplative quality of ‘Ninfa’ is defined by many as an earthly paradise. There are many interesting articles from the past: garden sculptures; arrangements with flowers, fruit and vegetables; and the art of picking and conditioning flowers for arrangements.

David has had many honours bestowed upon him thus far, including the prestigious Dean Hole Medal in 1994, but I think of him as a dear man who really lives his passion fully.