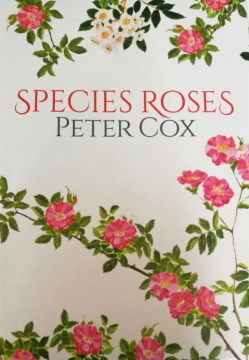 Species roses are the wild roses that pre-date civilization, found in the forests, swamps and grasslands of their native habitats, having evolved over millions of years. All the roses we know today descend from these wild roses. There are an estimated 120 species of wild rose in the world, all native to the northern hemisphere. At least 56 varieties of species roses are available in Australia, most of them introduced by 19th century colonists. This is the first book dedicated to the wild roses to be published anywhere in the world in over 100 years.

The story of the book started in 1995, when Heritage Roses in Australia Inc. held a conference in the town of Orange, on the Central Tablelands of New South Wales, with the theme 'Species Roses - In the beginning'. Few people knew about species roses and it was decided that Peter Cox, who owned a heritage rose nursery, would grow a plant of each available variety. Peter also produced a botanical painting of each rose, and after the conference the plants and paintings were donated to the Orange Botanical Gardens. Peter prepared botanical notes, and these, together with high resolution photographs of the paintings, were to form a book, but it was never published.

This book was finally published in 2016, just in time for the 13th Biennial Conference of Heritage Roses in Australia Inc., coincidentally held in Peter's home town, Mittagong, on the Southern Highlands of New South Wales, and in his 91st year. A wonderful achievement, this is an authoritative text as well as being a beautiful coffee table book.

The book is available at $20 to HRiA members ($29.95 to non-members) plus postage. For more information contact Clive West at savwest@bigpond.com.